There is a player named DoubleAgent, and many players may be familiar with him. After the Pandaren Mystery expansion was launched, because the Pandaren had to choose a faction—that is, join the Alliance or the Horde to leave The Wandering Isle, and this player wanted Playing a permanently neutral Pandaren shaman, so he decided not to choose the faction, but stayed on The Wandering Isle and upgraded by herbalism and mining until full level.

And herbalism and mining will become gray after his level exceeds a certain level, only providing a pitiful dozens of points of experience, so each level of his promotion requires extremely terrible amounts of herbal ore to accumulate. 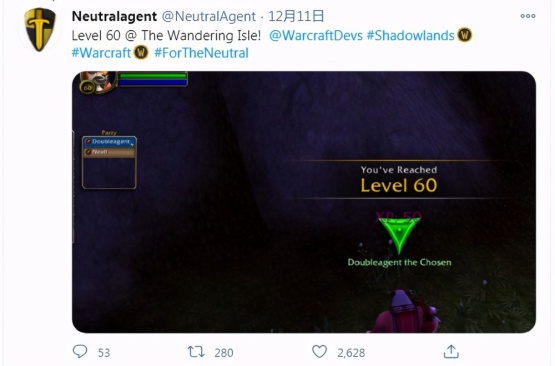 In the previous version, this player also reached the full level in the same way. This perseverance also moved Blizzard, and designed an NPC for him in the game.

When Doubleagent started to be known to players, someone once asked him why he wanted to upgrade in this way. He said, "When I heard that Pandaren was originally a neutral camp, I'm curious what happens if I can reach the full level but don't choose the camp" Someone asked him if he would continue to do this to the next version? He said, "This is my way of playing, of course!" Now it seems that Doubleagent has indeed done it.